Neo-Tarot is another deck of Tarot cards and a part of the new original project in geomancy (the art of divination), called "Celestial mosaic". This project was developed by a group of Tarot cards readers, philosophers, artists and poets, through their cooperative efforts, who had explored ancient and modern systems of divination for the sake of knowledge of the Truth through the Tarot.
The Neo-Tarot deck has no comparable counterparts either in Russia or in any other country. The distinctiveness of this deck is that it has no human images, so you get the opportunity to actually return to your so often "ruined" inner "I" and revive it. In fact, in the Neo-Tarot, the role of humans is taken on by symbols and images that all readers of Tarot cards know so well, and this does not complicate, but makes it easier to perceive a card and even enhances the energy of these cards.
This deck "breathes" with magical contemplativeness and meditativeness. It really bewitches you with its surreality, but it does this healing you. There is no "personification" in these cards, so for a diviner or a fortune-teller it becomes possible to maximize his or her immersion into this deck, because fate is not personified.
Any deck from this project will be a unique and unforgettable gift to your friends, relatives and loved ones, and will not only delight the eye, but will also be an excellent working tool in practices of divination. 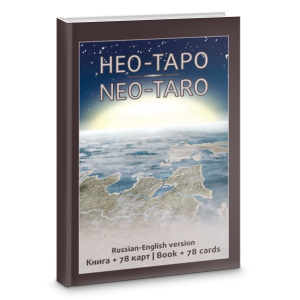